Bill MacLeod chairs the Antitrust and Competition practice group at Kelly, Drye & Warren LLP.  The Immediate Past Chair of the Antitrust Section of the American Bar Association, Bill is a former bureau director at the U.S. Federal Trade Commission (FTC). He offers his clients decades of experience in competition law, trade regulation, advertising, privacy and security issues, from both an agency and business perspective.  Bill represents some of the most prominent drivers of innovation and industry today, from new ventures to multi-national corporations.

Bill guides companies through investigations, approvals and the sophisticated challenges associated with mergers and acquisitions.  He has obtained FTC and United States Department of Justice Antitrust Division clearance of numerous acquisitions and joint ventures in a range of industries, including medical devices, grocery products, defense contracting and steel manufacturing.  Bill also has helped clients protect themselves from threat of consolidation.

Bill has been involved in the resolution of major initiatives with notable and high-profile results.  He served as special counsel for a government investigation of one of the world’s largest and most complex manufacturing industry mergers.  He obtained one of the largest judgments ever awarded in an advertising and antitrust case, and successfully defended a major marketer in the FTC’s first trial under the modern unfairness doctrine.  Bill was involved in settling the FTC’s first preliminary injunction action in an ad-substantiation case.  He has also handled large-scale investigations of privacy and data security practices, litigated a multi-district Sherman Act case over online pricing, and resolved a myriad of price discrimination claims.

In addition, Bill counsels and defends companies and trade associations on pricing, advertising, distribution, intellectual property licensing and competitor relations.  In his work with trade associations and their members, he has resolutely fought onerous regulations and advocated sensible, viable policies on competition, biotechnology, health and privacy.  In his work on privacy and security, Bill defended the practices of major household-name retailers, manufacturers and financial services companies.  Bill also represents companies in advertising, antitrust and intellectual property disputes before the state and federal courts, the FTC and the National Advertising Division of the Council of Better Business Bureaus.

Over the last years, Bill was named the Washington, D.C. Advertising “Lawyer of the Year” by Best Lawyers®, and has been included in The Best Lawyers in America© (Woodword/White, Inc.), The Legal 500 U.S., and among Washington, D.C.’s Super Lawyers.  Bill’s clients appreciate his demonstrated skill in translating legal esoterica into functional and useful business advice.  Bill is highly valued for his perseverance and ability to produce tangible results and first-rate work product.  Bill consistently delivers the requisite experience and intellect needed to assist his clients in achieving their goals.  Clients and colleagues alike appreciate Bill’s encyclopedic knowledge of antitrust and consumer protection law.

Bill previously served as director of the FTC’s Bureau of Consumer Protection, which is the chief federal bureau prosecuting unfair and deceptive advertising.  In this position, he served as the U.S. delegate to the Organization for Economic Cooperation and Development, where agency heads of Europe, Australia and Japan develop policies for financial regulations, product safety and international advertising.  Bill also held such positions as advisor to the assistant attorney general of the U.S. Department of Justice’s Antitrust Division; director of the FTC’s Chicago regional office; and attorney advisor to the FTC chairman. This expert panel examines recent calls for the Federal Trade Commission (FTC) to engage in substantive rulemaking under the competition and consumer-protection prongs of Section 5 of the FTC Act. How far does FTC statutory authority under 6(g) extend? Is rulemaking appropriate as a matter of policy? How has FTC rulemaking fared in the past and what guideposts should apply? 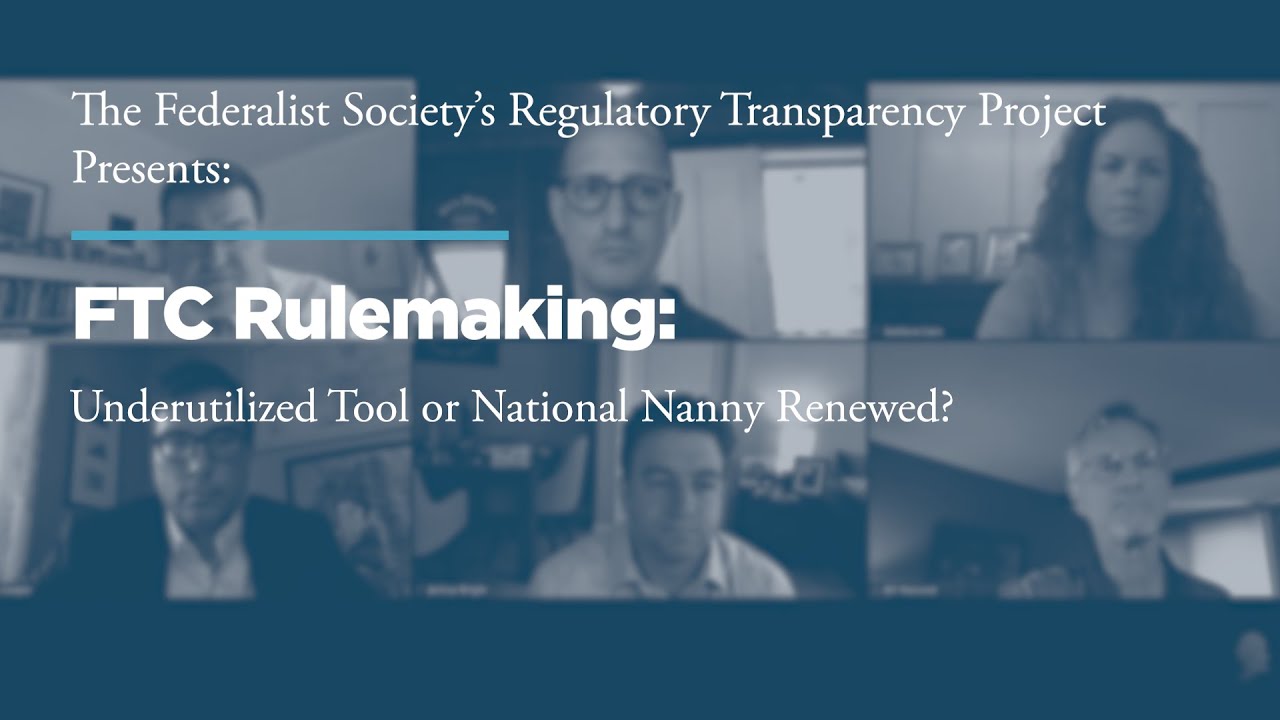 This expert panel examined recent calls for the Federal Trade Commission (FTC) to engage in substantive rulemaking under the competition and consumer-protection prongs of Section 5 of the FTC Act. How far does FTC statutory authority under 6(g) extend? Is rulemaking appropriate as a matter of policy? How has FTC rulemaking fared in the past and what guideposts should apply?